Sing, goddess, the rage of George and the ImportError,

and its devastation, which put pains thousandfold upon his programs,

hurled in their multitudes to the house of Hades strong ideas

of systems, but gave their code to be the delicate feasting

of dogs, of all birds, and the will of Guido was accomplished

since that time when first there stood in division of conflict

Backstory Before Things Get Weird

This post is about how an ImportError lead me to a very strange place.

I was writing a simple Python program. It was one of my first attempts at Python 3.

I tried to import some code and got an ImportError. Normally I solve ImportError’s by shuffling files around until
the error goes away. But this time none of my shuffling solved the problem. So I found myself actually reading the
official documentation for the Python import system. Somehow I’d spent over five years writing Python code professionally
without ever reading more than snippets of those particular docs.

What I learned there changed me.

Yes, I answered my simple question, which had something to do with when I should use .’s in an import:

But more importantly I realized that this whole time I had never really understood what the word module means in Python.

According to the official Python tutorial, a “module” is a file containing Python definitions and statements.

In other words, spam.py is a module.

But it’s not quite that simple. In my running Python program, if I import requests, then what is type(requests)?

That means module is a type of object in a running Python program. And requests in my running program is derived from requests.py, but it’s not the same thing.

So what is the module class in Python and how is babby module formed?

Modules and the Python Import System

Modules are created automatically in Python when you import. It turns out that the import keyword in Python is syntactic sugar for a somewhat more complicated process. When you import requests, Python actually does two things:

2) Binds the local variable requests to that module

And how exactly does __import__() create, load, and initialize a module?

Well, it’s complicated. I’m not going to go into full detail, but there’s a great video where Brett Cannon, the main maintainer of the Python import system, painstakingly walks through the whole shebang.

But in a nutshell, importing in Python has 5 steps:

1. See if the module has already been imported

Python maintains a cache of modules that have already been imported. The cache is a dictionary held at sys.modules.

If you try to import requests, __import__ will first check if there’s a module in sys.modules named “requests”. If there is, Python just gives you the module object in the cache and does not do any more work.

If the module isn’t cached (usually because it hasn’t been import yet, but also maybe because someone did something nefarious…) then:

sys.path is a list in every running Python program that tells the interpreter where it should look for modules when
it’s asked to import them. Here’s an excerpt from my current sys.path:

When I import requests Python goes and looks in those directories for requests.py. If it can’t find it, I’m in for an ImportError. I’d estimate that the large majority of real life ImportError’s happen because the source code you’re
trying to import isn’t in a directory that’s on sys.path. Move your module or add the directory to sys.path and you’ll have a better day.

In Python 3, you can do some pretty crazy stuff to tell Python to look in esoteric places for code. But that’s a topic for another day!

Python has a builtin type called ModuleType. Once __import__ has found your source code, it’ll create a new ModuleType instance and attach your module.py’s source code to it.

Then, the exciting part:

__import__ will create a new namespace, i.e. scope, i.e. the __dict__ attribute attached to most Python objects.
And then it will actually exec your code inside of that namespace.

Any variables or functions that get defined during that execution are captured in that namespace. And the namespace is
attached to the newly created module, which is itself then returned into the importing scope.

5. Cache the module inside sys.modules

If we try to import requests again, we’ll get the same module object back. Steps 2-5 will not be repeated.

Okay! This is a pretty cool system. It lets us write many pretty Python programs.

But, if we’re feeling demented, it also lets us write some pretty dang awful Python programs.

Where it gets weird

I learned how to fix my immediate import problem. That wasn’t enough. 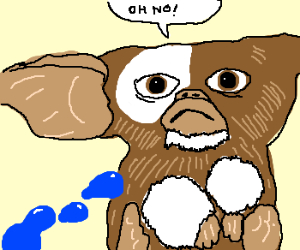 With these new import powers in hand, I immediately starting thinking about how I could use them for evil, rather than good. Because, as we know:

So far, the worst idea I’ve had for how to misuse the Python import system is to
implement a mergesort algorithm using just the import keyword. At first I didn’t know if it was possible. But, spoiler alert, it is!

It doesn’t actually take much code. It just takes the stubbornness to figure out how to subvert a lot of very well-intentioned, normally helpful machinery in the import system.

We can do this. Here’s how:

Remember that when we import a module, Python executes all the source code.

So imagine I start up Python and define a function:

This will print out some beeps.

Now imagine instead I write the same lines of code as above into a file called say_beep.py. Then I open my interpreter and run

What happens? The exact same thing: Python prints out some beeps.

If I create a module that contains the same source code as the body of a function then importing the module will produce the same result as calling the function.

Well, what if I need to return something from my function body? Simple:

Anything that gets defined in the module is available in the module’s namespace after it’s imported. So from a import b
is structurally the same as b = f(), if I structure my module correctly.

Okay, what about passing arguments? Well, that gets a bit harder. The trick is that Python source code is just a long string, so we
can modify the source of a module before we import it:

Now this certainly isn’t pretty. But where we’re going, nothing is pretty. Buckle up!

Okay…how can we apply these ideas to implement mergesort?

It works by taking a list, splitting it in half, and then splitting the halves in half until we’re left with individual elements.

Then we merge adjacent elements by interleaving them in sorted order. Take a look at this diagram: 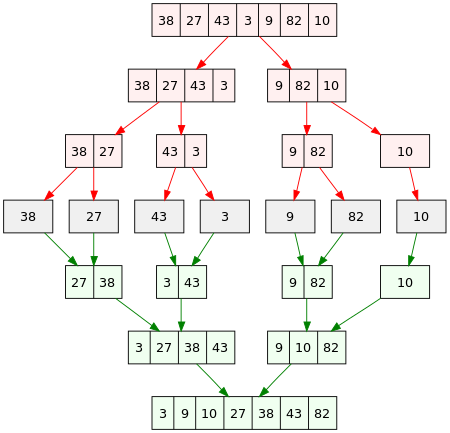 Or read the Wikipedia article for more details.

Well, here’s the code: (Walk-through below, if you don’t feel like reading 100 lines of bizarre Python)

That’s all we need.

The body of madness.py is compact. All it does is generate a random list of numbers, grab our template implementation of merge sort from it’s own docstring (how’s that for self-documenting code?), jam in our random list, and kick off the algorithm by running

This is the fun part.

First, here is a “normal” implementation of merge_sort as a function:

It has three phases:

But since our rule says that we can’t use functions, we need to replace this recursive function with import.

That means replacing this:

And that’s really it.

We just use the tools we learned about to simulate calling functions with arguments and returning values. And we add a few lines to trick Python into not caching modules and instead doing the full import process when we import a module with the same name as one that’s already been imported. (If our merge sort execution tree has multiple levels, we’re going to have a lot of different left.py’s).

And that’s how you abuse the Python import system to implement mergesort.

Many paths to the top of the mountain, but the view is a singleton.

It’s pretty mindblowing (to me at least) that this approach works at all. But on the other hand, why shouldn’t it?

There’s a pretty neat idea in computer science is the Church-Turing thesis. It states that any effectively computable function can be computed by a universal Turing machine. The thesis is usually trotted out to explain why there’s nothing you can compute with a universal Turing machine that you can’t compute using lambda calculus, and therefore there’s no program you can write in C that you can’t, in principle, write in Lisp.

But here’s a corollary: since you can, if you really want to, implement a Turing tape by writing files to the file system one bit at a time and importing the results, you can use the Python import system to simulate a Turing machine. That implies that,
in principle, any computation that can be performed by a digital computer can be performed (assuming infinite space, time, and patience) using the Python import system.

The only real question is how annoying a computation will be to implement, and in this case Python’s extreme runtime dynamism makes this particular implementation surprisingly easy.

The Python community spends a lot of time advocating for good methodology and “idiomatic” coding styles. They have a good reason: if you’re writing software that’s intended to be used, some methods are almost always better than their alternatives.

But if you’re writing programs to learn, sometimes it’s helpful to remember that there are many different models of computation under the sun. And especially in the era when “deep learning” (i.e. graph-structured computations that simulate differentiable functions) is really starting to shine,
it’s extra important to remember that sometimes taking a completely different (and even wildly “inefficient”) approach to
a computational problem can lead to startling success.

It’s also nice to remember that Python itself started out as (and in a sense still is!) a ridiculously inefficient
and roundabout way to execute C code.

Abstractions really matter. In the words of Alfred North Whitehead,

My “import sort” is certainly not a useful abstraction. But I hope that learning about it will lead you to some good ones!

In case it’s not obvious, you should never actually use these techniques in any code that you’re intending to actually use for anything.

But the general idea of modifying Python source code at import time has at least one useful
(if not necessary advisable) use case: macros.

Python has a library called macropy that implements Lisp-style syntactic macros in Python
by modifying your source code at import time.

Finally, as bad as this mergesort implementation is, it allowed me to run a fun little experiment. We know that
mergesort has good computation complexity compared to naive sorting algorithms. But how long does a list have to be before a standard implementation of bubble sort runs slower than my awful import-based implementation of mergesort? It turns out that a list only has to be about 50k items long before “import sort” is faster than bubble sort.

Computational complexity is a powerful thing!

All the code for this post is on Github