I make a point of trying as many new startup products as I reasonably can. Quite a lot use a freemium model where they offer me some free service and then pester me to upgrade to the $10/month “pro” version. Out of dozens of products I’ve tried over the last couple of years, I’ve upgraded to the pro version approximately three times (Dropbox, Github, Spotify.)

Why so few? Sometimes the product is just bad. Sometimes it’s targeted at a real problem I don’t have. But in a surprising number of cases, I’m not upgrading because the startup is using a freemium model that just doesn’t make sense.

Now I’ve never managed a freemium model myself, so these are just common sense observations. I may be missing the deep inner logic of particular programs are particular startups. But in too many cases, it’s mighty hard to imagine how what I’m seeing could make sense.

Let’s start with some basic logic:

2)   The amount of money you make equals (the number of people paying you, i.e. your customers) X ($ per customer)

So far, so good. But let’s pause for one crucial point. Only people who pay you are customers. Everyone else, including non-paying users of your service, are not customers. That’s not to say they aren’t lovely people, or that they may not serve a critical business purpose like word-of-mouth marketing or generating content, but they don’t pay you and so they are not customers.

Now the logic behind the freemium model is:

6)   So we need to acquire as many free users as possible to maximize our # of customers and therefore our revenues.

There’s a gaping logic hole between #5 and #6, and it swallows many startups.

(Artist’s rendition of a logic hole)

The problem is the assumption that you’ll be able to convert a constant % of users into customers.

Let’s say you’re a fitness tracking app, for example DailyBurn (which I use)[2]. You launch your core product, a calorie and workout tracker. It’s free to use, and after a month you’ve got 10k users. Great! But you’re running a bit low on cash, so you decide to get started on the “mium” part, and you launch a set of “pro" features like the ability to save more favorite foods and to plan meals in advance: 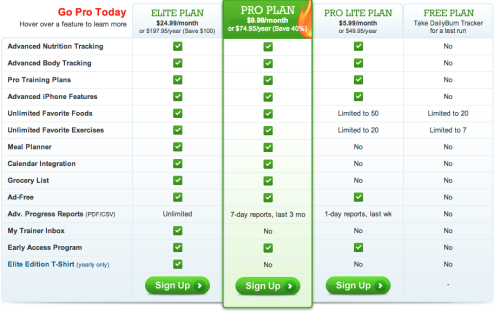 Five hundred users (5%) sign up for the $10/month pro plan, and suddenly you’re making $5k a month in revenue. Not only can keep your servers on, you can also afford some calories for yourself to track.

Of course, this story very rarely ends well. The startup devotes all of its resources into improving and marketing its core free product, and (in the good case) actually gets a large number of free users. But the more users they acquire, the lower the conversion percentage dips. Suddenly the startup is facing titanic operating costs, all shouldered by a relatively tiny number of actual customers.

The best example of this trap is a product I use more than I would like to: Reddit. In 2012, Reddit had 32 billion page views. But according to the best numbers I could find (which are admittedly very dated) their premium offering (“Reddit Gold”) attracts less than .1% of users [3][4] When you take a look at what Reddit gold offers, it’s not hard to see why: 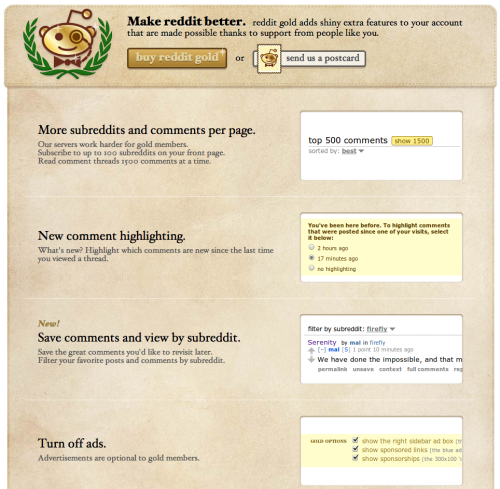 If I pay Reddit $3/month, I can turn off (unobtrusive) ads and… save and highlight comments?

The Reddit and DailyBurn premium programs have one key thing in common: they’re a set of (basically random) tacked on features that only appeal to the most power of power users. Both of the core products solve a clear and urgent need (how do I lose weight, and how do I find cat pictures). But the premium products solve a minor problem for a small minority of users.

And that explains the diminishing returns to scale: not only are 97% of your users never going to care about saving comments, but even worse – the people who are most likely to become super-power users are also most likely to be early adopters. So if you design your premium program to only appeal to power users, you should expect that conversion rates will drop with each new cohort of increasingly unsophisticated users.

If you ignore that fact, you may very quickly find yourself learning the old economic truism that “anyone can sell a dollar for 99 cents.”

What’s the alternative? From day one, you should think of your free product as a way to foster addiction to your premium product, ideally by creating a behavior pattern that will naturally and inevitably lead to needing premium-only features. Your free product should make your user aware of two things:

The best example I know of freemium done right is Amazon’s AWS.  I bet you can immediately recall AWS’s de facto tagline “a great, cheap way to start a company with no upfront capital costs.” Amazon has pushed that message very hard and very effectively. But here’s the problem: AWS is actually not cheap. It’s only cheap AT FIRST.

Amazon offers a “free tier” that lets you spin up a few virtual machines with a little bit of storage (about enough to host a low traffic blog), all for free. This encourages users to familiarize themselves with the service, and that experience makes it easy for them to image how awesome it would be to run a entire serious startup on AWS.  Many startups, including mine, do exactly that.

But once you’re a few months in and you’ve added a few more instances and a database, the bills suddenly jump. And you very quickly notice that running a more powerful EC2 instance for a year is about 5-10x more expensive than just buying a comparable machine. And storage on EC2 (which you’re probably going to need for that database) costs $0.10/GB/MONTH! You can buy a 1TB hard-drive for what it costs to host 1TB of data on EC2 for one month.

From my perspective as the guy writing the checks, this model is painful. But from Amazon’s perspective it’s brilliant. By the time I actually experience the real cost of using AWS it’s far too late for me to switch. I’m addicted.

And to add insult to injury, AWS cuts off the free tier after one year of usage. They figure that after a year you’ve probably already told all your friends about AWS, and if by then you still haven’t gotten addicted then you’re probably never going to. So there’s no reason to continue to subsidize your use.

The other freemium products I pay for work the same way: anyone who has 5GB of stuff to store in Dropbox will pretty soon generate a sixth GB; if you start storing all your code in Github, eventually you’ll want to keep some of it private; if you replace iTunes with Spotify, eventually you’ll want to listen to music on your iPhone and need premium.

There are plenty of perfectly good reasons to want a lot of permanent free users. They’ll tell their friends, and as Fred Wilson points out you can show advertising. They may even generate the content that brings people to your site. But with a $2 CPM, you’ll make about as much from 5000 users paying $100/year as you would from two hundred fifty million ad impressions.

At the very beginning of a startup, it would be foolish to focus excessively on exact monetization strategies before you’ve demonstrated that you can create monetizable value. And many businesses have started with free and then found pockets of value they could charge for. Nevertheless, a little thought at the beginning can go a long way. Especially if you’re addressing a niche market, it makes a lot more sense to drive up your conversion rates by designing your free product to addict customers to paying you.

[1] Obviously subject to ethical and other constraints

[2] Although DailyBurn is not nearly the most egregious freemium offender, I picked them as an example because a) I actually use them but never see myself upgrading and b) they’ve pivoted to become a protein powder company, which I’m assuming means their freemium model did not work as hoped.